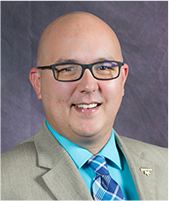 Aaron was hired by the City of Rancho Mirage on November 12, 2013, as an Accounting Technician II and was the first of the Finance staff to be located at the Rancho Mirage Library. In January of 2015, Aaron’s position was reclassified to Accountant. With hard work and determination, Aaron was soon promoted to the Library’s first Operations Manager. During his tenure as the Library’s Operations Manager, Aaron had the opportunity to work closely with City Council and its Directors, Commissioners and Board members. In April of 2018, our long-time Library Director David Bryant retired. Shortly thereafter, Aaron was named Library and Observatory Director.

Over the course of his career with the City of Rancho Mirage, Aaron has been involved in some amazing projects. He was instrumental in the design and construction of the Joe and Gigi Roberson Mineral Collection and in the management of space planning at the Library. As a member of the Rancho Mirage Writers Festival Steering Committee, Aaron helped lead the Writers Festival toward becoming one of the nation’s best in just five years.

Most recently, he had the opportunity to assist in the oversight of planning, development and construction of the Rancho Mirage Observatory. Aaron says he is proud to be a part of such an amazing facility (now Rancho Mirage Library and Observatory) and its mission, which is to promote lifelong learning.